You can find on this page the Miami airports map to print and to download in PDF. The Miami airport map presents terminals and gates of the international airport of Miami in Florida - USA.
Miami is served by multiple airports. The principal airport being Miami International Airport. Other airports as its shown in Miami airport map include Homestead General Aviation Airport, Miami Executive Airport, General Aviation Center, Miami-Opa-Locka Executive, Dade-Collier Training & Transition Airport, and the Miami Seaplane Base.

The Miami International Airport (MIA) and Fort Lauderdale Hollywood International Airport (FLL) are the closest to the city, they are conveniently located on the Miami City bus services, metro, tri-rail and taxi services as its mentioned in Miami airports map. Travel from the airport to the city centre takes no longer and less expensive from both international airports. Most of the domestic and international flights operate from these airports. Another airport that operates in Miami is the Palm Beach International Airport (PBI), which serves the Miami Metropolitan Area. MIA is the major operating airport in the city of Miami, many passengers travel through this airport. It is 13.84 kilometres from the city and has various transport services available round the clock. It takes 30 minutes to reach the city centre.

FLL is the second largest operating airport in the city, serving over 32 million passengers who travel through this airport. Located 50.5 kilometres from Miami city, it has a lot of transport services with round the clock operating hours as you can see in Miami airports map. It is not as close to the city centre as MIA and it takes 47 minutes to reach central Miami. As the second largest operating airport in Miami, Fort Lauderdale Hollywood International Airport serves more than 32 million passengers. Transport facilities charge according to the local government order and theprice of hotels around the airport are affordable. It is a bit far from the city centre but hotels in the city cost more. Airport delay is not more than 15 minutes while security and immigration delay takes more than 20 minutes.

PBI serves over 6 million passengers in and around Miami metropolitan areas. It is located 118.2 kilometres from the city centre making it the farthest among the 3 airports as its shown in Miami airports map. Transportservices are readily available with 24 hour operating hours which takes about 3 hours 30 minutes to reach the city centre. Palm Beach International airport operates only for Miami Metropolitan Areas with more 6 million passengers who travel through the airport. It is very far from the city centre and has fewer transport facilities. Hotel prices are more expensive compared to the other airports. As the less used airport, airport delay is less than 5 minutes while security and immigration delay takes more than 20 minutes. 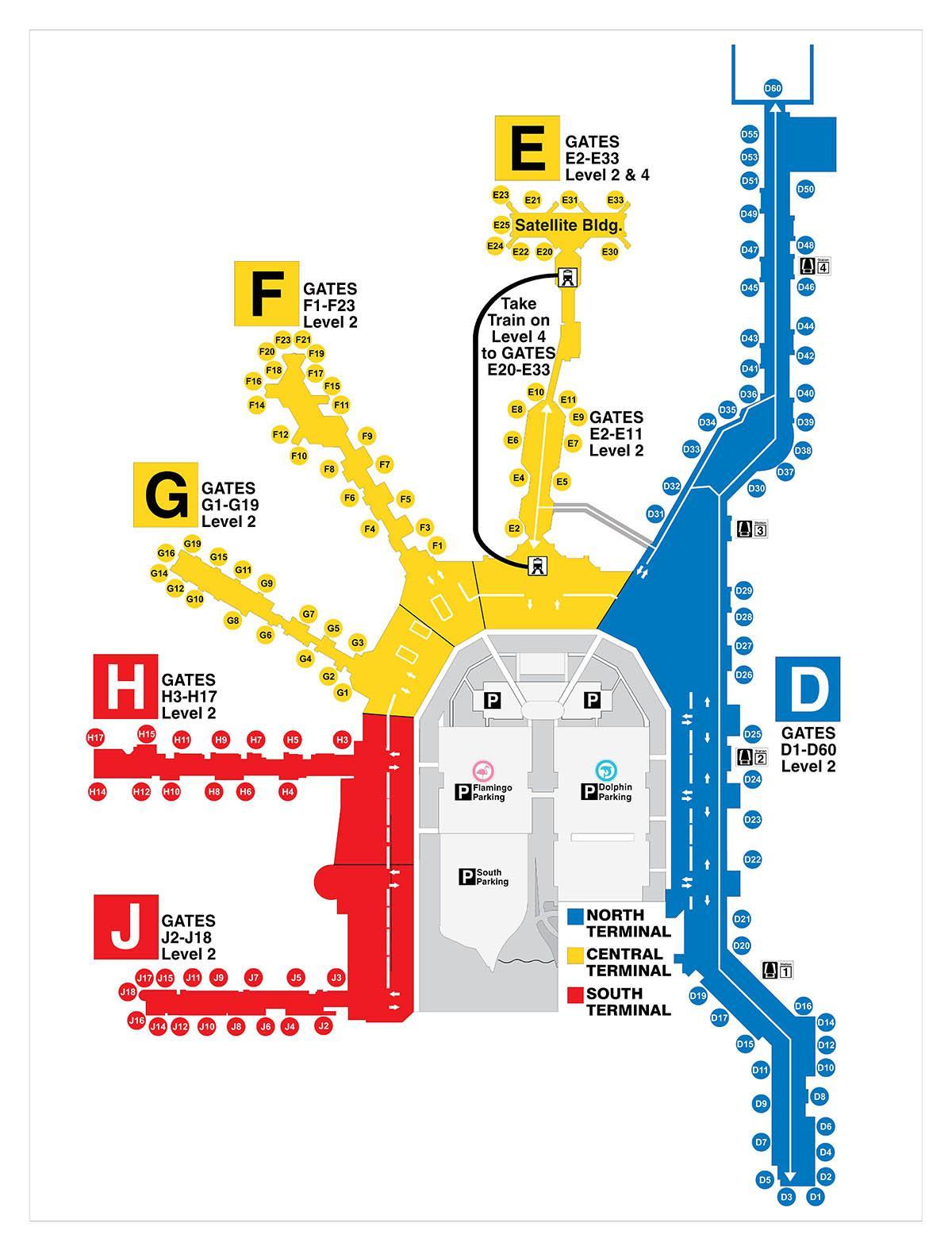 Miami International Airport (IATA: MIA, ICAO: KMIA, FAA LID: MIA), also known as MIA and historically Wilcox Field, is the primary airport serving the South Florida area as you can see in Miami airports map. The airport is in an unincorporated area in Miami-Dade County, Florida, eight miles (13 km) northwest of Downtown Miami, in metropolitan Miami, between the cities of Miami, Hialeah, Doral, Miami Springs, the village of Virginia Gardens, and the unincorporated Fountainebleau neighborhood. The airport is a hub for passenger airlines American Airlines, Executive Airlines under the American Eagle name; cargo airlines, UPS Airlines and FedEx Express; and charter airline Miami Air. It is a focus airport for LAN Airlines and its subsidiaries, both for passengers and cargo operations. Miami International Airport has passenger and cargo flights to cities throughout the Americas and Europe, as well as the Canary Islands off the African coast, and cargo flights to Asia; it is South Florida main airport for long-haul international flights.