You can find on this page the Miami trains map to print and to download in PDF. The Miami trains map presents the rail network and railway stations of the trains of Miami in Florida - USA.
For the 15-minute interval weekday daytime service, 7 trains are required, and 5 trains are thus stored after each rush period as its mentioned in Miami train map. Only four trains are used to provide the weekday evening and weekend 30-minute headway service. 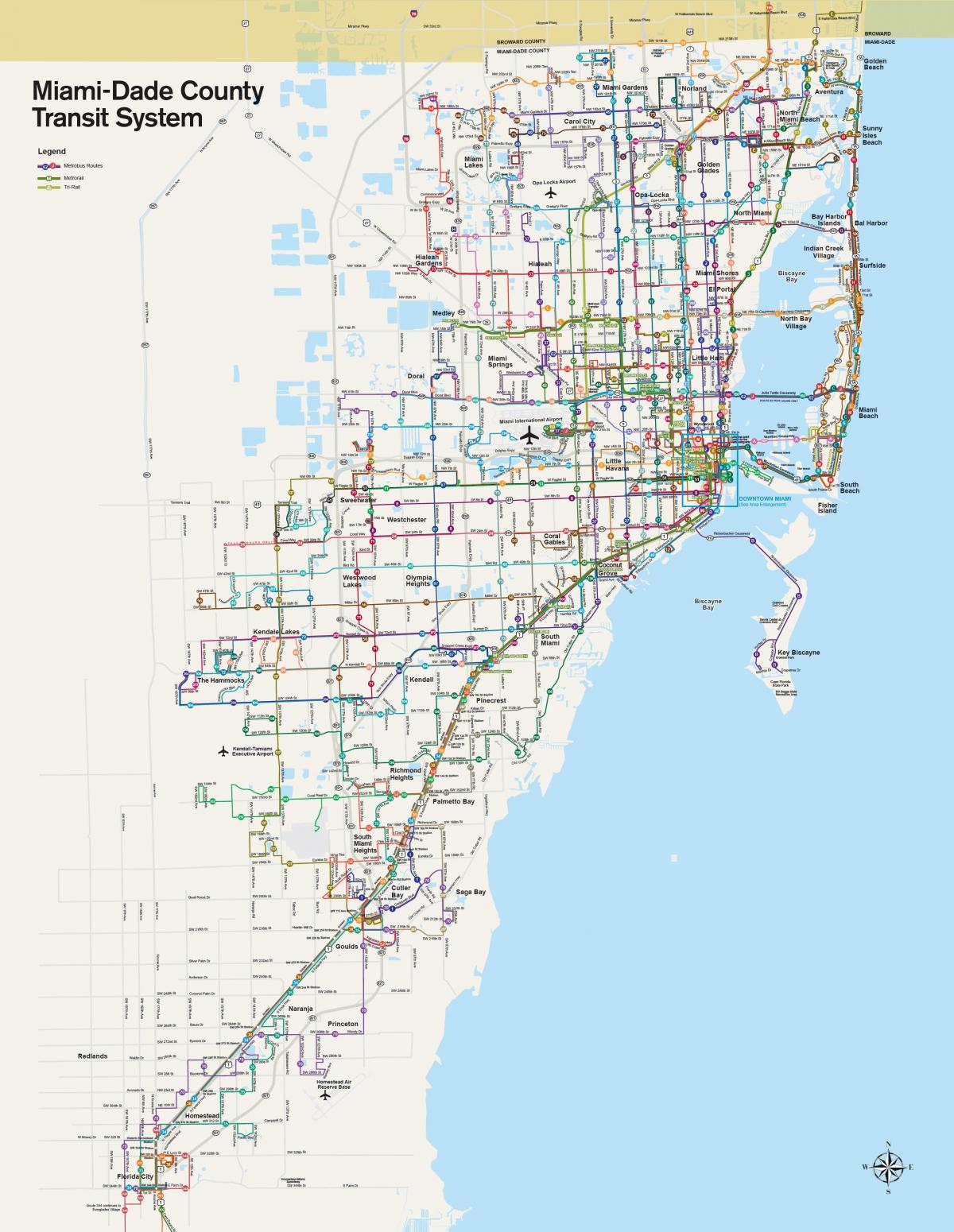 Tri-Rail (reporting mark TRCX) is a commuter rail line linking Miami, Fort Lauderdale, and West Palm Beach, Florida, United States. It is run by the South Florida Regional Transportation Authority (SFRTA). The 70.9-mile-long (114.1 km) system has 18 stations along the South Florida coast as you can see in Miami rail map. The system connects directly to Amtrak at numerous stations, and the Metrorail in Hialeah (Miami) at the Tri-Rail and Metrorail Transfer Station. In 2012, it will connect with both systems at Miami Central Station at Miami International Airport. A second Tri-Rail line on the Florida East Coast Railway corridor may be in operation by 2014, eventually extending service north to Jupiter, Florida and south to Downtown Miami, as well as numerous intermediate cities such as Hollywood, and inner city Miami neighborhoods such as the Design District, Little Haiti, and Wynwood.

Tri-Rail fare is divided into six zones for one day passes, ranging from $2.50 to $11.55, with fare calculated by the number of zones travelled through, and whether it is one way or round trip. On weekends, a $5 all day pass good for all zones is available, though trains run with very long headways. For frequent use, the $100 monthly Tri-Rail pass, or the $140 Tri-Rail/Metrorail/Metrobus monthly pass is much more cost effective as its mentioned in Miami rail map. Discount fares are available for senior citizens, the disabled, and children under five. Certain businesses allow their employees to register for the Employer Discount Program, which reduces their fares by 25%. Free parking is available at most Tri-Rail stations. On weekdays, 50 train trips are made in all, with 25 in each direction, while on weekends only 16 trips, eight north and eight south, are made in all, with two hour headways between each train. While Tri-Rail peaks at speeds above 80 miles per hour (129 km/h), it can be extracted from the timetable and the distance of the line that its overall average speed is approximately 38 miles per hour (61 km/h).

Tri-Rail shares its track with Amtrak Silver Meteor and Silver Star and CSX Transportation Miami Subdivision as its shown in Miami rail map. The Florida Department of Transportation purchased the track from CSX in 1989. Under the terms of the agreement, CSX would continue to provide dispatch services and physical plant maintenance for the track and would have exclusive freight trackage rights until certain conditions were met. Tri-Rail participates in the EASY Card regional smartcard-based fare collection system along with Miami-Dade Transit. Purely paper tickets are also available for same-day or weekend use. A paper ticket or an EASY Card with a paper-based transfer receipt (created after a confirmed trip is completed) can be used to obtain transfer discounts when transferring to Broward County Transit as well as Palm Tran. Only EASY Cards may be used to obtain a transfer discount when transferring to Miami-Dade Transit.