You can find on this page the Miami metro map to print and to download in PDF. The Miami metro map presents the network, zones, stations and different lines of the metro of Miami in Florida - USA.
The current standard fare on Metrorail is $2 and reduced fare is $1. A standard monthly pass costs $100 and $50 for reduced fare as its mentioned in Miami metro map. The monthly Easy Cards are sold at over 50 sales outlets. 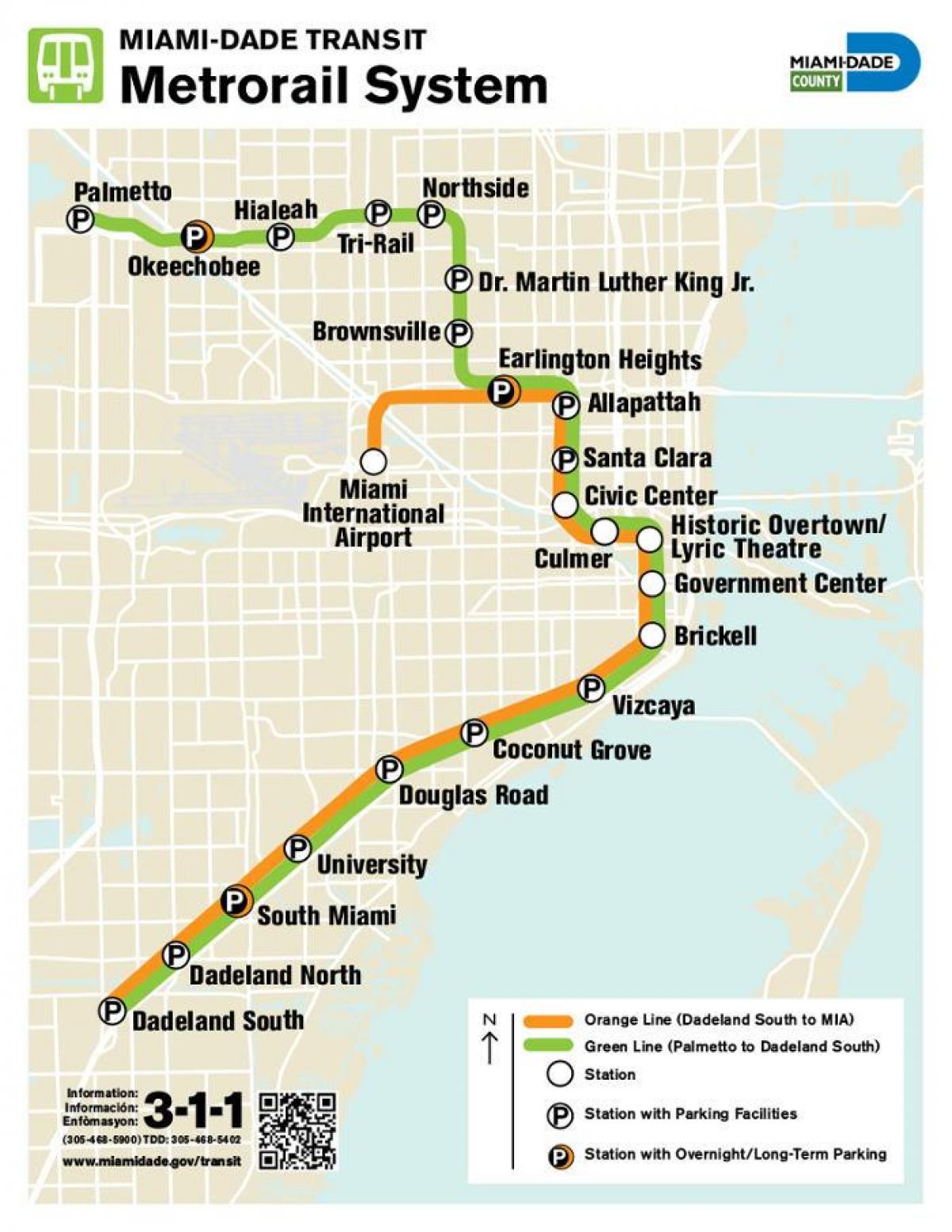 The Miami Metrorail, officially Metrorail, is the heavy rail rapid transit system of Miami, Florida, United States, serving the Greater Miami area as its shown in the Metro map Miami. Metrorail is operated by Miami-Dade Transit (MDT), a departmental agency of Miami-Dade County. Opened in 1984, it is Florida only rapid transit metro system, and is currently composed of 22.4 miles (36.0 km) of line with 22 stations. Metrorail serves the urban core of Miami, connecting the central business districts of Downtown Miami, Brickell and the Civic Center with the Greater Miami neighborhoods of Hialeah and Medley to the northwest, and to Coconut Grove, Coral Gables, South Miami, ending at Dadeland in suburban Kendall.

Metrorail connects to the Metromover in Downtown, which provides metro service to the entirety of Downtown and Brickell. Additionally, it connects to South Florida commuter rail system at Tri-Rail Station as you can see in the Metro map Miami. Metrorail has seen increased ridership growth over the years, with an average daily ridership of 66,000 passengers, as of November 2011 (96,100, including Metromover). In 2012, Metrorail will open its 23rd station, Miami Central Station, at Miami International Airport (MIA), opening a 16-station re-branded Orange Line between the MIA and Dadeland South stations. The new line is expected to increase ridership significantly, adding millions of riders per year, and allowing residents and visitors alike direct access from the MIA to Downtown Miami, and greater connectivity between various modes of transit throughout Miami-Dade County. Central Station will provide direct service to Amtrak inter-city rail services, Tri-Rail commuter rail, Greyhound Lines intercity bus, and the Rental Car Center. Miami Central Station is expected to attract 150,000 daily commuters and travelers.

Metrorail runs from the northwest in Medley through Hialeah, into the city of Miami, the downtown area, through Coral Gables and South Miami, and ending in southwest Miami-Dade at Dadeland Mall (see the Metro map Miami). There are 22 accessible Metrorail stations, one about every 1.25 miles (or 1.9 kilometers). Metrorail connects to the Metromover system at Government Center and Brickell stations and to South Florida Tri-Rail suburban commuter rail system at the Tri-Rail Station. Along the Metrorail system, the tracks are mostly elevated. The three sections that are not are under I-95 between Vizcaya and Brickell stations, under I-95 just east of Culmer station, and the northern end of the line from just east of the Palmetto Expressway heading west into the Palmetto station and tail track. In each of these cases, the tracks ride on ground level for a brief amount of time.

It was not until 1980 when the building works started, after bringing the proposal to all responsible authorities for them to approve the estimate. Three years later the first section, named Metrorail, was finished , counting with 10 stations. In spite of that, it did not went into commercial operations until next year, in 1984. The first day of service it was completely free. It was thought out to tend to Miami suburban zones, having as main objective that its citizens park their vehicles at the different stations and use the trains, reason why many of the stops have big parking lots. Currently, the subway system moves more than 70.000 passengers daily between its two lines as its mentioned in Miami subway map, going over the city form north to south and connecting at the middle with several complementary means of transportation. The iconic monorail Metromover is famous for appearing in many movies and tv shows set in the city.

With a total of 39,2 kilometers, the Metrorail lends its service from Medley village to north of Miami-Dade county, up until Kendall district on the south of the city as its shown in Miami subway map. It is composed by two commercial lines, the Green and the Orange, together they add a total 23 stations. They both share the route on 15 stations, from Dadeland South Station terminal to Earlington Heights Station, where the Orange line detours towards the city airport heading West, and the Green line keeps going North. The Miami subway system lends its service from Monday to Sunday, setting its schedule this way: From Monday to Thursday it operates from 5:00 am to 11:00 pm. On Fridays the system opens its doors at 5:00 am, operating uninterrupted until midnight.. When it comes to Saturdays, the service is available from 6:00 am until midnight. On Sundays, it operates from 6:00 am until 11:00 pm.

The Metrorail offers a connection to the Metrobus service (bus lines that tend to zones near the stations) in all its stops as you can see in Miami subway map. However, it also connects to the Metromover and the Tri-Rail railroad. In the first case, it connects on the Brickell station trough a transfer to Brickell Loop route on the monorail. In Government station, the very center of town, it connects to the Inner Loop, Brickell Loop and Omni Loop lines of the Metromover. With the Tri-Rail it connects at the Tri-Rail and Metrorail station, it lends its service to border areas on the North of Mirth of Miami. To use the Metrorail the user must get an EASY Card, this card value is up to 2$, or an Easy Ticket pass. You can buy both options at the vending machines located in every station, authorized sale locals or at the Miami Transport Services Center. The ticket and the card have different sale modes, although the ticket is not rechargeable. The flat rate to travel on the subway is $2,25 but it counts with several attractive special rates that could work for frequent users.