You can find on this page the Miami streets map to print and to download in PDF. The Miami roads map presents the road network, main roads, routes and motorways of Miami in Florida - USA.
Miami an eclectic city brimming with must-see neighborhoods. From historic roads to culturally charged avenues to new and trendy streets as its mentioned in Miami streets map.

Miami road system is based along the numerical "Miami Grid" where Flagler Street forms the east-west baseline and Miami Avenue forms the north-south meridian. The corner of Flagler Street and Miami Avenue is in the middle of Downtown in front of the Downtown Macy (formerly the Burdine headquarters). The Miami grid is primarily numerical so that, for example, all street addresses north of Flagler Street and west of Miami Avenue have "NW" in their address. Because its point of origin is in Downtown which is close to the coast, therefore, the "NW" and "SW" quadrants are much larger than the "SE" and "NE" quadrants as its mentioned in Miami streets map. Many streets, especially major ones, are also named (e.g., Tamiami Trail/SW 8th St), although, with a few notable exceptions (e.g., Coral Way), the number is in more common usage among locals.

All streets and avenues in Miami-Dade County follow the Miami Grid, with a few exceptions, most notably Coral Gables, Hialeah, and Miami Beach. Some neighborhoods, such as The Roads, is thusly named because its streets run off the Miami Grid in a 45-degree angle, and therefore all named roads. Ocean Drive is the most famous avenue in Miami Beach as you can see in Miami streets map. Here you will find everything you have ever seen about Miami in film and on TV: rows of palm trees, bright blue sky, gym-toned bodies, Latin music, people out doing sport, cocktail bars, endless sandy beaches and turquoise sea. Ocean Drive is a lively street that is always bustling with people at all hours of the day. After becoming somewhat run down in the 1970s, Ocean Drive picked itself back up again after several entrepreneurs set up businesses there and breathed new life into an area previously known for crime and cheap housing. It worked. Hotels, bars, shops and restaurants opened their doors, and more and more neon lights began to appear where there had been only empty shop units.

It is got a lot of names, but whether you call it Tamiami Trail, SW 8th Street, or simply “Calle Ocho,” this stretch of road has been the hub of Miami Cuban community for decades. It is brimming with Cuban food, ventanitas, and infectious music and includes well-known spots like Domino Park (formally known as Maximo Gomez Park) and the Tower Theater (see Miami streets map). One of Miami oldest destinations, Miracle Mile was chosen to be the hub of Coral Gables by the city founder, George Merrick. In 1922 he picked this half-mile stretch of Coral Way to be the center for Coral Gables City Hall and the main place to catch the trolley line. Much of Biscayne Boulevard is just traffic lights and run-of-the-mill buildings, but when you hit the historic MiMo District, aka Upper Eastside, Miami history shines through. Most of the motels lining this street date back to the 1950s and 1960s, and retain much of the original architecture. 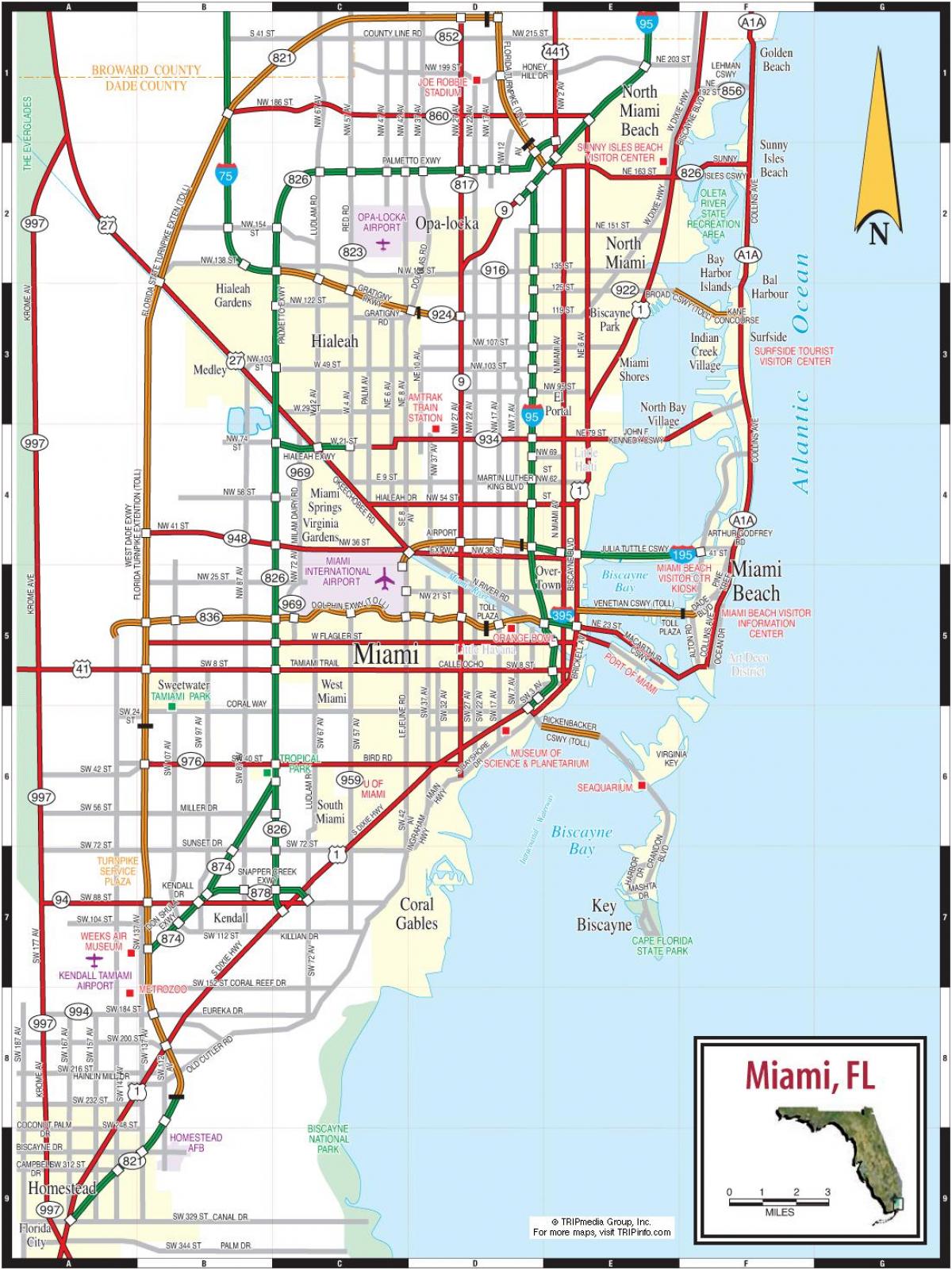 Miami, FL has some of the worst traffic in the nation. Between residents, domestic and international tourists, and commuters, its roads are jam-packed from sunrise to sundown as its mentioned in Miami roads map. Unfortunately, it is hard for drivers to get around Miami safely. More car accidents are reported in Miami-Dade County than anywhere else in the state. Studies have shown that poor road conditions and dangerous driving behaviors are at the root of the problem. Motorists, bicyclists, and pedestrians will continue to get hurt until Miami addresses these issues. Lawmakers and city officials have acknowledged that there is a lot of work to do. Fortunately, the city has also taken steps to make its roads safer.

Miami has six major causeways that span over Biscayne Bay connecting the western mainland, with the eastern barrier islands along the Atlantic Ocean. The Rickenbacker Causeway is the southernmost causeway and connects Brickell to Virginia Key and Key Biscayne. The Venetian Causeway and MacArthur Causeway connect Downtown with South Beach as its shown in Miami roads map. The Julia Tuttle Causeway connects Midtown and Miami Beach. The 79th Street Causeway connects the Upper East Side with North Beach. The northernmost causeway, the Broad Causeway, is the smallest of Miami six causeways, and connects North Miami with Bal Harbour. In 2007, Miami was identified as having the rudest drivers in the United States, the second year in a row to have been cited, in a poll commissioned by automobile club AutoVantage. Miami is also consistently ranked as one of the most dangerous cities in the United States for pedestrians.